How come it has become harder to draw a non resident Wyoming antelope license? This question is often asked of Sy and Ambrosia when hunters call looking for a Wyoming antelope hunt. The answer involves three main factors. First, the over all demand from non residents desiring to hunt antelope has caused the draw odds to become more difficult. Second, Wyoming’s antelope population has experienced a decline due to a recent harsh weather event and thirdly, disease has led to fewer licenses being issued. 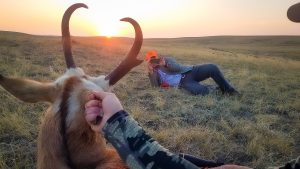 In March of 2021 the central and eastern half of Wyoming experienced a monster of a blizzard. Our city streets, state highways and interstates were completely closed for an extended period of time. This storm ended up being the 3rd largest in recorded history to ever hit this part of Wyoming. Pronghorn antelope are fragile animals and many did not survive the storm. Luckily, temperatures warmed up and the snow melted fairly quickly. Otherwise, the impacts would have been far worse.

The fall of 2021 was unusually warm and dry throughout much of Wyoming. This created perfect conditions for out breaks of Epizootic Hemorrhagic Disease in localized areas of the state. Epizootic Hemorrhagic Disease, or EHD, is a viral disease that is transmitted by biting midges. Although the disease cannot be spread to humans, it can sure raise hell with a population of pronghorn antelope. So, in addition to winter loss from the March blizzard, we also experienced more death loss that fall from EHD. 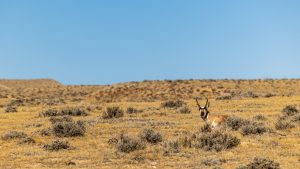 The Wyoming Game and Fish reduced the number of licenses going into the 2021 draw to decrease hunter harvest. Licenses for the 2022 hunting season were again reduced in response to lower antelope populations. Overall, the Wyoming Game and Fish Department has cut 18,000 plus tags statewide in the last two years in response to lower pronghorn numbers.

The Wyoming Game and Fish, along with all western states, has experienced a significant increase from non residents applying for licenses. This demand is good news for the future of hunting. The bad news; it’s harder than ever to draw a tag right now. If you want to hunt with SNS in 2023 or later, it’s imperative to book early so that preference points can be purchased which will help significantly in drawing your antelope license. 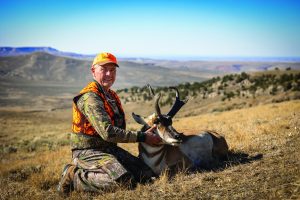 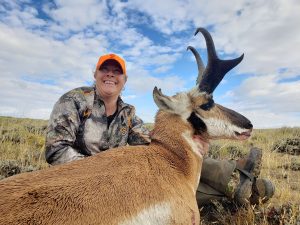 Antelope herd conditions in central and eastern Wyoming are improving. We had a mild winter with very good spring and late summer moisture. The antelope fawn crop in 2022 is very high and we are seeing lots of twins running around the plains. Wyoming antelope populations have always cycled due to weather and disease. Fortunately, antelope have the ability to rebound quickly. Open range and quality habitat in Wyoming are plentiful for these prairie speed goats. It won’t take but a couple of years to rebuild these herds. 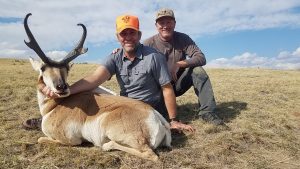 SNS’ 2022 antelope hunts are currently underway and we are taking some very nice trophies. There are still great numbers of mature bucks available to our clients. Be sure you follow our Facebook and Instagram pages to see the quality bucks our professional hunting guides are able to get hunters on.

Do not hesitate in booking your 2023 trophy antelope hunt. As of right now, we have availability for next fall, but dates fill quickly as demand has never been higher. Give us a call or send an email. You don’t want to miss your opportunity to book a Wyoming Antelope Hunt with SNS Outfitter and Guides!