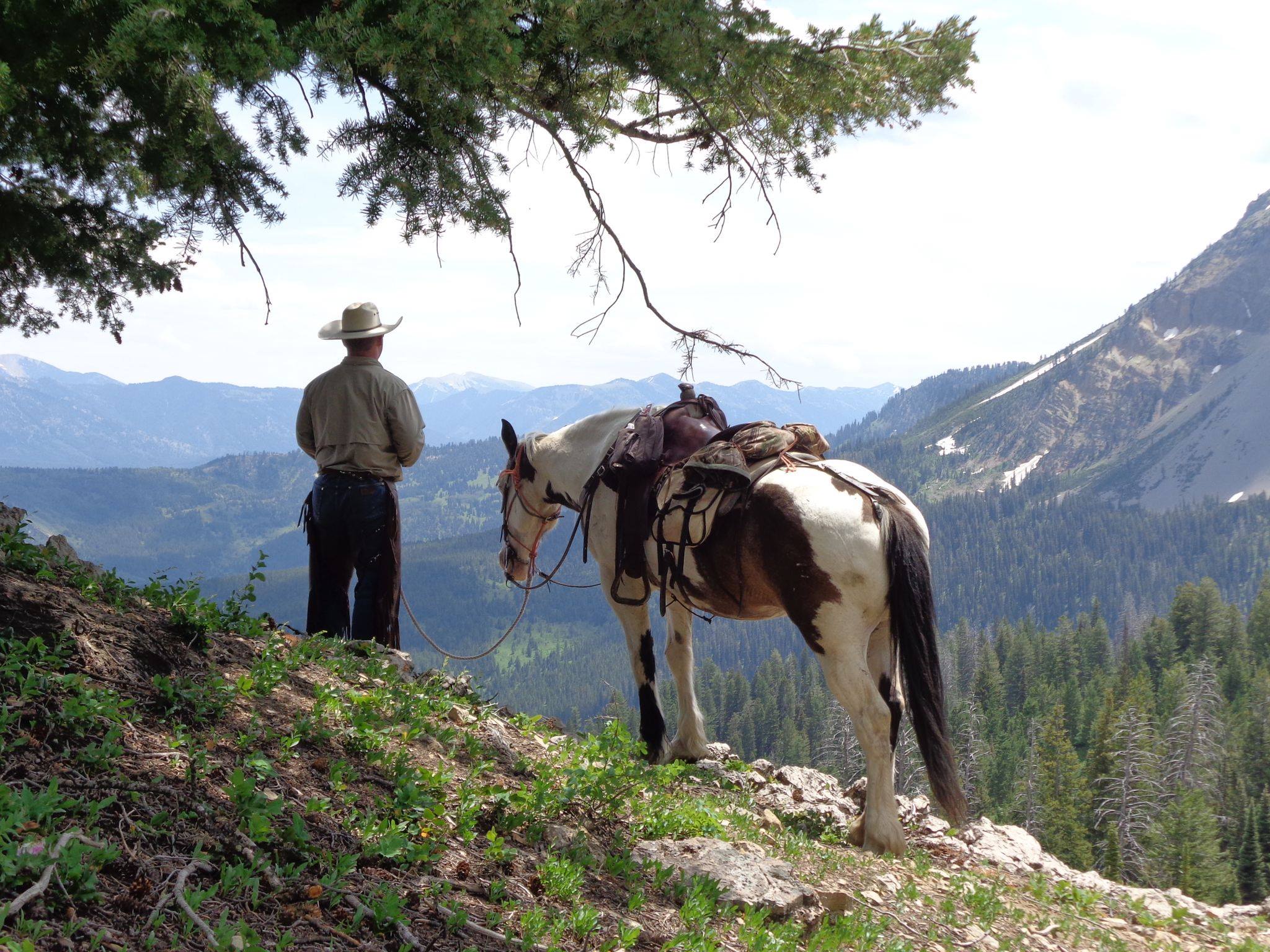 A Kansas boy sat in front of his computer and googled “Outfitters in Wyoming” a few years ago. He needed an internship based in the outdoors to graduate from college with his degree in Wildlife Outdoor Enterprise and Management. His search led him to SNS Outfitter & Guides and shortly after packed his bags for Wyoming to begin his next chapter. After making the move, he knew that becoming a hunting guide was an inevitable career path for him.

Growing up in the flat lands of Kansas, Hunter recalls the culture shock of being surrounded by steep hills, mountains, and the expansive range of wild trees. “Everyone was very nice – coming all the way from Kansas, this area has a great, welcoming feel to it.” 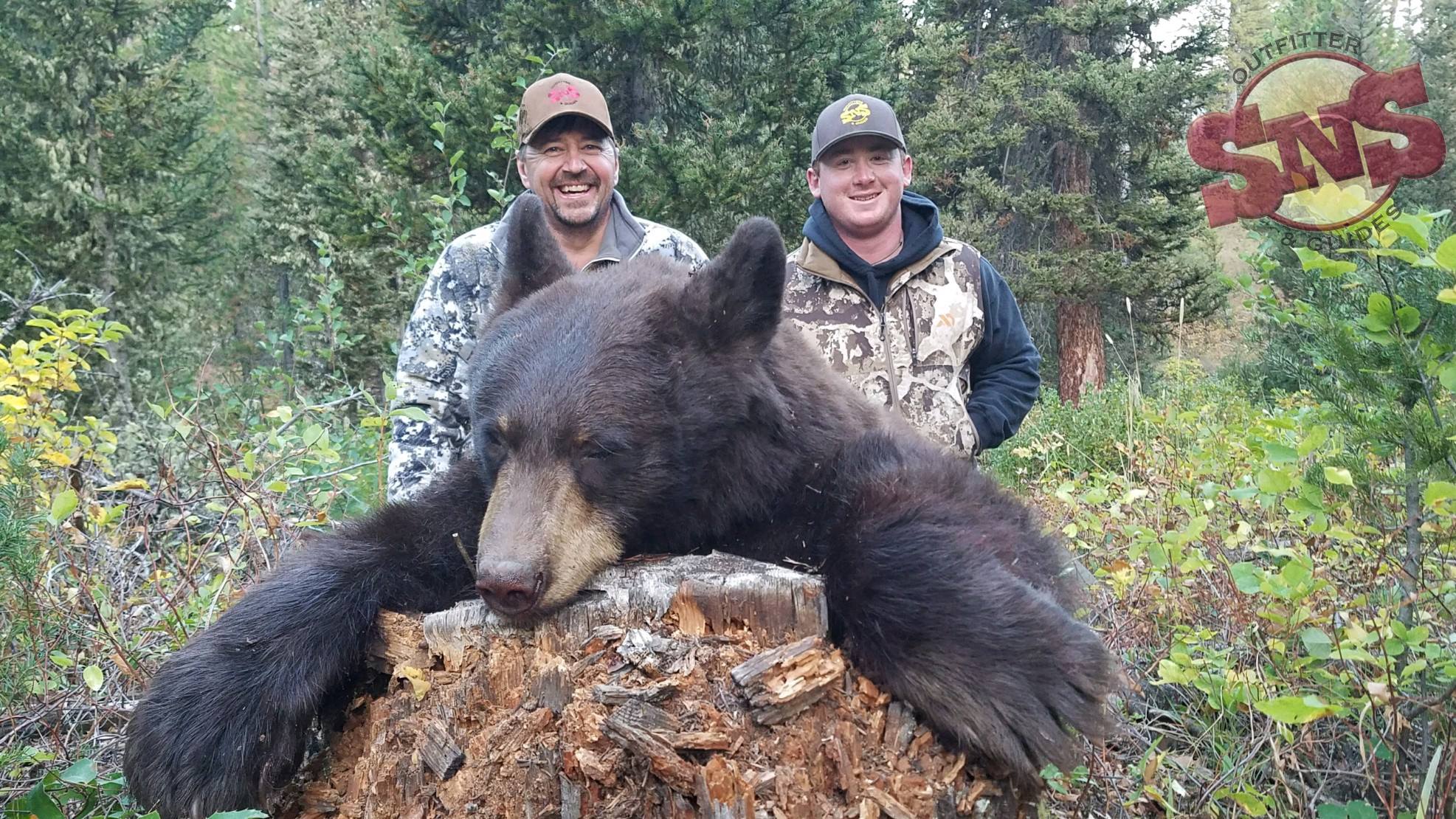 Bringing out the Bear Baits

Throughout the Spring and Fall seasons, Wyoming’s premier area for black bear hunting is located in the Greys River country. The hunts are all based out of the Box Y Lodge, which is the lone lodge on the river. When describing the Greys River Valley, Hunter paints it as “Beautiful…not a whole lot of places in the world like that. The terrain is steep, making it the perfect, wild place to live four or five months out of the year.”

Hunter experienced his first season with SNS last Spring. He was responsible for the bear baits on the Greys River hunts and for some time, he went on hunts with guides but didn’t specifically guide. “To me, bear baiting was extremely backwards because you are literally baiting for something that could kill you,” Hunter chuckled.

After Hunter’s first trip guiding a bear hunt, in the fall of 2017, he was overwhelmed with the feeling of accomplishment, as guiding bear hunts wasn’t initially in his “scope of work.” To hunter this meant he really proved himself, his abilities, and his knowledge for the sport. “You can thank the veteran guides for being such great role models and knowledge banks.” Throughout the trek, Hunter’s first client made him feel very welcome and confident as a guide. That season they hunted until the very last minute of the fifth day to get the bear they had their eye on – and their persistence paid off. Hunter recalls a great moment of satisfaction for both him and the client. He was able to guide three bears out of the Box Y Lodge area – kicking off his first Fall guiding season for SNS.

Once spring bear came to a close, Hunter and the crew replace their daypacks and bear bait for saddles and horse feed, and make their journey, just down the road, to the Jackson Hole Outfitters camp for the summer trail riding business. Prior to coming out to JHO, Hunter’s experience riding horses was limited. For these summer months, he enjoyed trail riding and showing guests from all over the world the beauty Wyoming has offer. During the down times at camp, their tasks include tidying up, clearing trail, and fixing and clearing corrals. 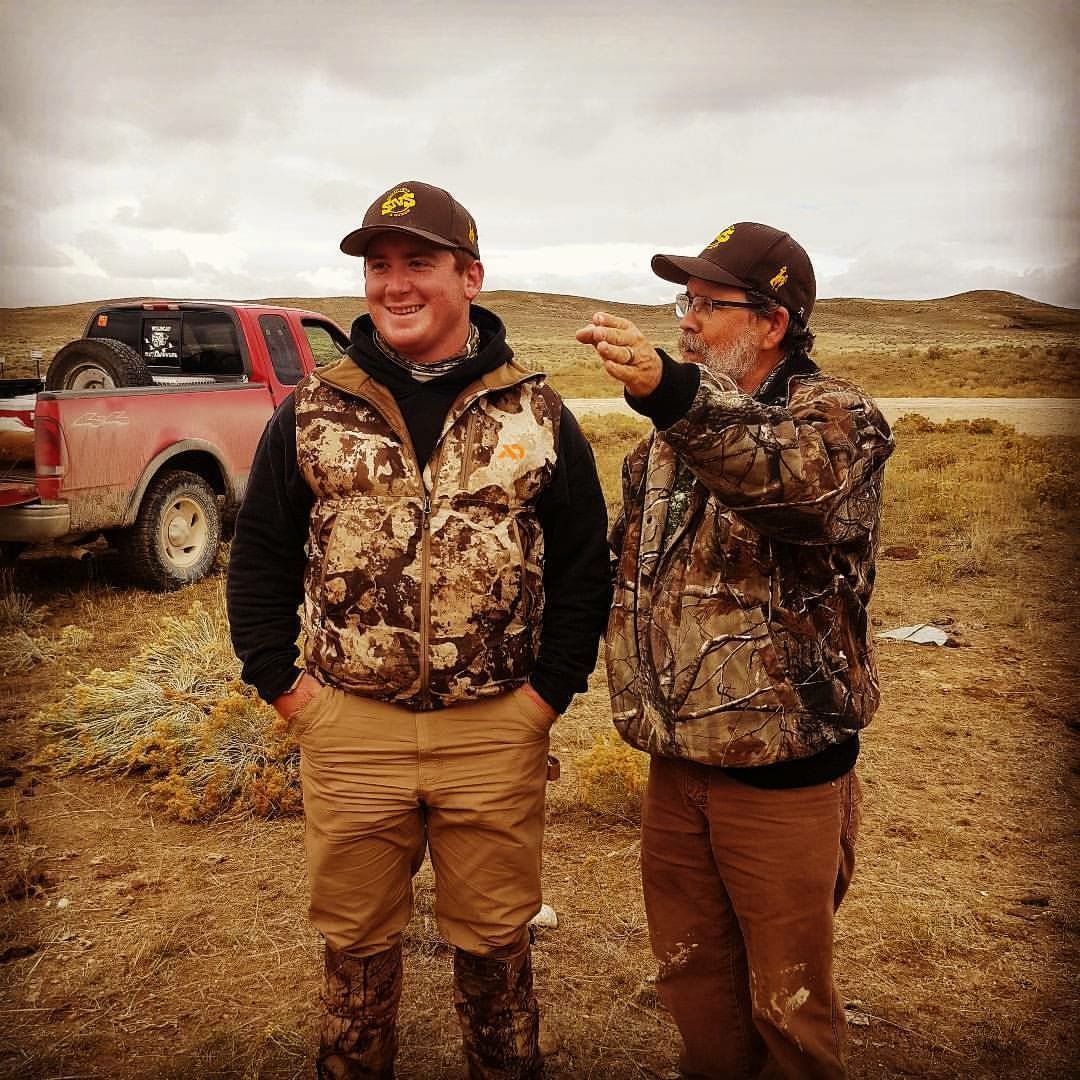 Hunter then heads to the   and guides two weeks of elk hunts. These weeks were extremely enjoyable for him because he was surrounded by the mountains once again. The last week of the season Hunter spent there, he was the only guide to have a client tag out. The client took home a very nice 5-point elk, which was quite fortunate considering the luck that the others had. Hunter believes that hunting elk on horseback is not for the light of heart. “It can be very worrisome to oversee clients and make sure everything is going well logistically while on horseback yourself.”

In terms of client satisfaction, Hunter finds that clients don’t mind his inexperience because they trust in his abilities of navigating the area and connecting them with the animal they’re after.

Many rewarding memories of past hunts fill Hunter’s brain, but the first one that always comes to mind is the guiding trip he led for a Mule Deer combo hunt. On the second day of the trek, Hunter’s client had a Mule Deer in front of him and on the third day said he hadn’t been closer than 200-yard of a deer. When the fourth day of the trek came, Hunter decided to change the approach of the hunt to the “spot and stalk” strategy and got within 60 yards of a herd of Mule Deer and the client tagged out. “The guy had never done a spot and stalk like that before and was extremely happy with the outcome. We all were!” In terms of challenging trips, he finds guiding on horseback to be near the top of the list, due to the added element of navigating a horse through mountainous terrain, and the difficulties of having hunters who are not necessarily totally horseback able.

“This first-year guiding is one of the greatest I have ever had. I walked away with zero regrets, and I am certain I found my true calling. I strive to be the best guide I can be, and I will do it for as long as my body allows.” Hunter takes pride in the fact that everyone SNS makes you feel like you’re home and apart of the family. Their eagerness to see their clients fill their tags and for the guides to lead successful trips is second to none. Many guides took Hunter under their wing to ensure he would thoroughly understand the ropes and made sure that there would be no a man left behind. “I guess you can say we’re all a big family.”

Book a trip with SNS today!

A Note from Hunters Dad:

Those two words best describes how Hunter’s mother and I felt when Hunter finished the last day of his junior year at K-State and headed west to the Wyoming mountains, with no way to contact him for a week or two at a time, to work for and learn from people we had never heard of. Our nervousness was totally a waste of energy. We booked a couple of nights and a trail ride with Jackson Hole outfitters just a few weeks after he had gotten up there (had to check it out)  and I will never forget the look on his face or the sound of his voice when we pulled up and he had the mounts saddled up and ready to go. He just beamed with excitement.

After our ride, we met a couple of the SNS guides at the trailhead and Mark W., after tying up his mount, walked up to Mary Ann and asked if she was mom and she said yes. The next thing Mark said to her was “Sorry but you have lost your son, we are not giving him back” with a big smile.

Hunter has always a passion with the outdoors. Growing up in rural Kansas just outside a small town there were many opportunities for him to grow that passion. From my earliest memories, he was either laying in a field under a burlap sack trying to call geese in, slipping into the pastures chasing anything from squirrels to whitetails or CRP fields following the dogs in search of quail or pheasants.  Hunter was always up to go hunting. When he was around 8-9 years old, he started going with me on the weekend pheasant hunts. The grass was over his head, mud deep and the treks long but he never complained Hunter just enjoyed being on the hunt and always without prodding, asking for more.

When Hunter got into high school, he worried more about getting out of the building and into the field probably more than he should have but what really set him apart from the others was his love of taking someone out for their first hunt. He would go out of his way to make should whoever was with him had a good time and success whether they were a young kid or 60 plus he seemed to gain more joy from teaching or introducing someone to hunting or fishing than actually being the one who pulled the trigger. With SNS outfitters he has found his true calling and living his dream. He left Kansas still wet behind the ears and returned a young man with focus and drive. Thank you SNS you are a class above the rest.