meet) and in western Wyoming where SNS Outfitters conducts our black bear hunts.

SNS has hunted black bears in western Wyoming, specifically the Greys River area, for over 20 years. Our harvest has consistently produced a 90% kill rate or higher on color phase black bears. In fact, we hardly ever see a black colored bear on our trail cameras and have only harvested a handful of completely black colored bears.

In the last 20 years, Wyoming has experienced a population surge statewide in our black bear populations. Hunting seasons still remain fairly restrictive with bears managed on a female mortality quota system. Once a set female quota is reached, the season closes. If the spring female mortality quota goes unfilled, the remaining quota rolls over to that area’s fall quota. The majority of bears taken by SNS are boars but occasionally a large female is taken. Sows with cubs at her side are not allowed to be harvested. 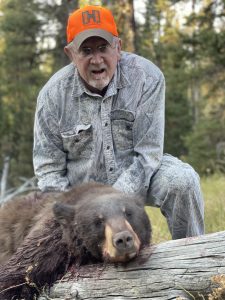 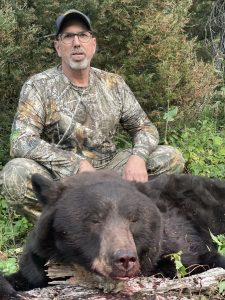 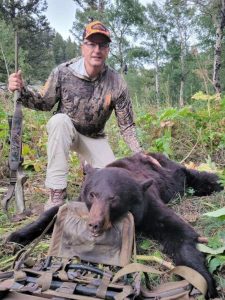 Wyoming allows baiting which has proven to be a very successful method of hunting. The Greys River area is rugged with lots of timber and would be extremely difficult to hunt using a spot and stalk method of hunting. Our spring hunts take place during the month of May and the fall hunts in early September. Licenses for non residents do not require a draw and can be bought over the counter. 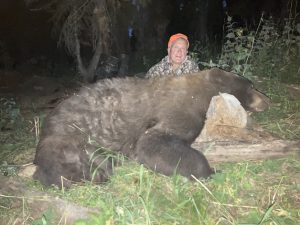 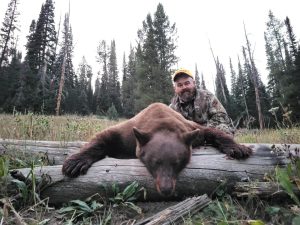 Both of our spring and fall black bear hunts stay at the popular Box Y Lodge. This is an extremely high end place to spend quality time hunting bears with SNS Outfitter and Guides.

If a black bear hunt is on your bucket list, give SNS a call. We would be happy to answer any questions you may have and to assist you in the booking process.